This is my latest aquascape project that was started in August 2013, it was planned as a layout with twisty wood and rocks as hardscape, along with various plants to recreate a forest edge look.

I managed to document the process over time so that i could track the progress of this project. This is also an opportunity for me to share the trials and tribulations of developing the aquascape.

I decided on a sloped triangle layout with a path under the twisty wood, my plan was to use a variation of plants to create the path (rather than using sand), along with an assortment of grey colored rocks to provide some accents in the scape. 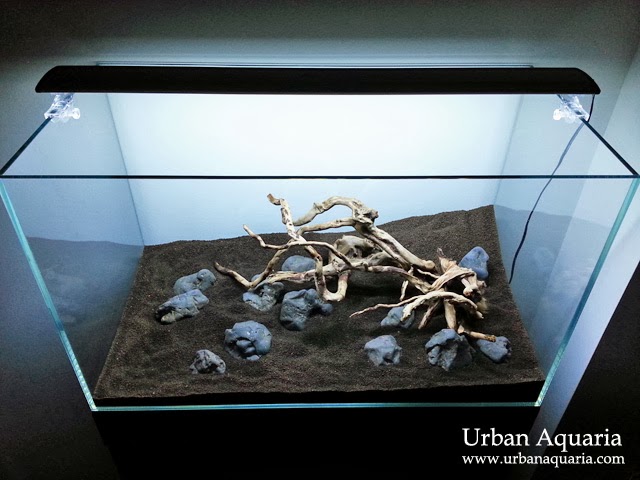 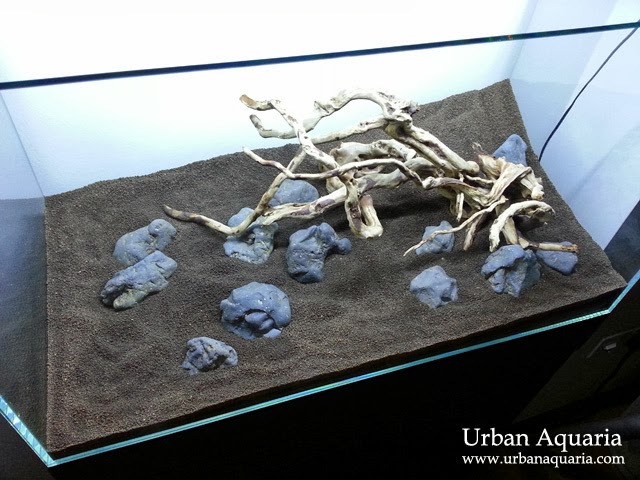 Once the hardscape was arranged, i proceeded to spray the soil substrate with water to make initial planting easier. I choose Eleocharis sp. 'Mini' as the main carpet plant. Echinodorus Tenellus and Cryptocoryne Parva were used as the mid-ground transition plants.

After initial planting, i filled the tank slowly using a bucket of water propped up on a ladder, hooked up to an air line tubing with flow control valve. The water was slowly trickled into the tank to minimize disturbance of the ADA soil substrate. 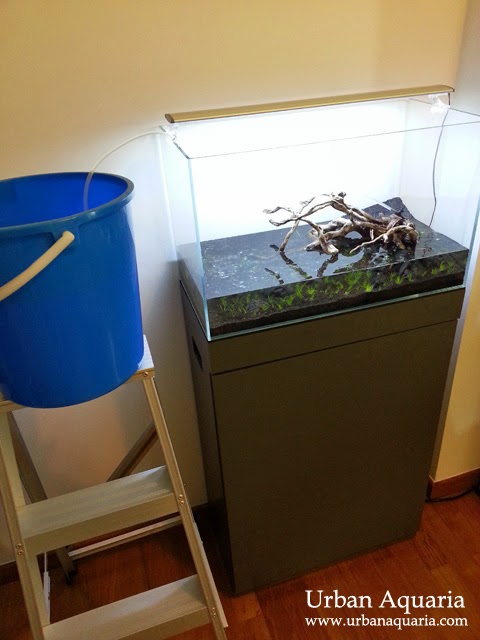 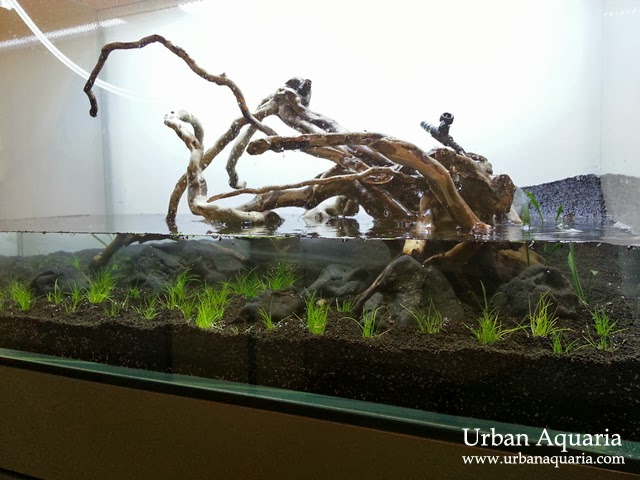 As the tank was filling up, i planted Rotala sp. 'Nanjenshan' and Rotala sp. 'Wallichii' as the fast growing background plants for soaking up excess nutrients during the start up stage.

Halfway filling the tank, the twisty wood started to float up... even though i had actually used the same piece of wood submerged in other tanks before, i made the mistake of removing it to put in storage and i forgot that once dried, the wood needs to be pre-soaked again in order to sink! :)

So i had to resort to the time honored method of keeping wood submerged... weigh it down with a big chunk of rock. 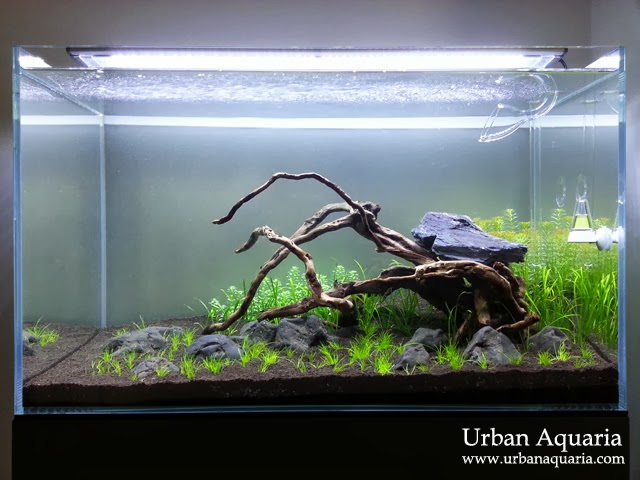 Note that the above photo was taken less than an hour after the tank was filled up... no clouding and no mess, a slow and steady filling of the tank can indeed achieve full water clarity from day one. :)

I didn't tie any moss on the twisty wood as i wanted to preserve the original detail of the wood texture instead. I was also hoping that nice green fuzz algae will eventually grow on it (yes, i actually want that algae!) to help create a natural aged look on the wood. 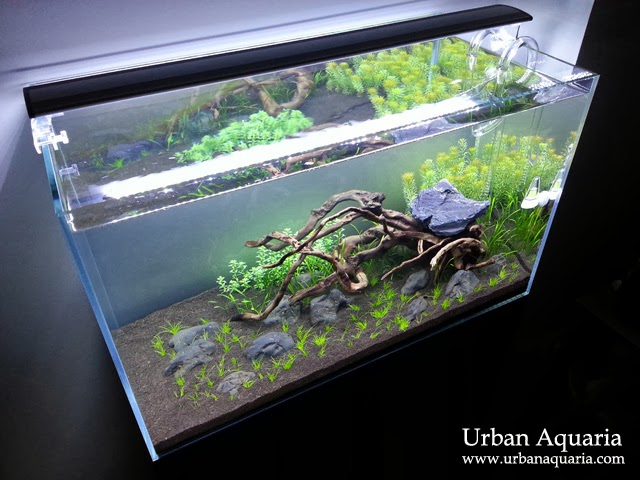 I cranked up the Co2 injection higher to give the plants a boost (notice my drop checker showing a bright yellow color)... no fauna in the tank yet, so no problems with elevated Co2 levels.

In this setup, i only used one set of the Up Aqua Z-Series Pro LED lightset, even though it is only 20+ watts and works out to only 1.2 watts per gallon (wpg), which many would consider as "low" lighting, this is actually more than sufficient for a tank during start up as the plant mass is still relatively low.

I have actually tried using 2 sets of these lights in other previous setups before but it eventually resulted in lots of unwanted algae growth... whereas when i switched to just using 1 set, the plants still grew well, but the algae receded and ceased to become an issue. So i've learnt my lesson and i'm now very careful to only use the appropriate amount of light to match the amount of plant growth and mass.

A portion of Seachem Matrix bio-media with established beneficial bacteria from my other existing cycled tanks was transferred to this tank's canister filter, so it helped to really speed up the cycling process. I left the tank to completely cycle over the next 2 weeks.

Tested the water conditions and it was fully cycled by the 2nd week, thanks to the earlier addition of "seasoned" bio-media.

A group of Boraras Brigittae, Otocinclus Cocama and Neocaridina Heteropoda were introduced as the resident tank fauna.

I also added some Rotala sp. 'Rotundifolia' in the background to complement the current plants too. 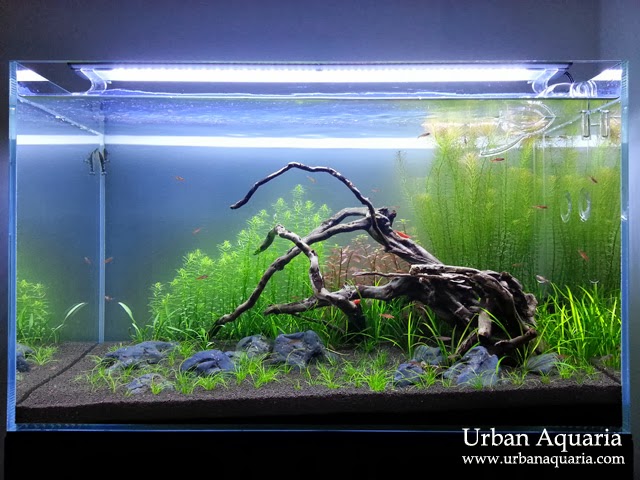 All of the plants were growing and pearling with no algae issues... the rotala plants in the background grew very fast, so trimming them was a part of the regular weekly maintenance.

Echinodorus Tenellus looked nice and grew fast too, but became rather invasive as it had a tendency to shoot long runners across the tank, which made controlling where they grow rather tricky. It ended up looking like a network of white lines crisscrossing the substrate, so i planned to remove them and replace with something else. 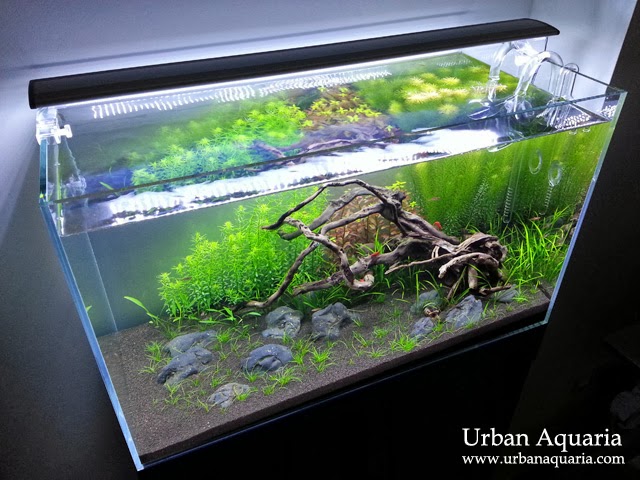 One day i was browsing online and chanced upon photos of aquascapes using just cryptocorynes, somehow i got inspired to change my aquascape mid-way into a "crypt tank", so i proceeded to pull out all the middle and background plants, and replaced them with various cryptocoryne plants (ie. c. wendtii,  c. x willisii, c. albida etc). 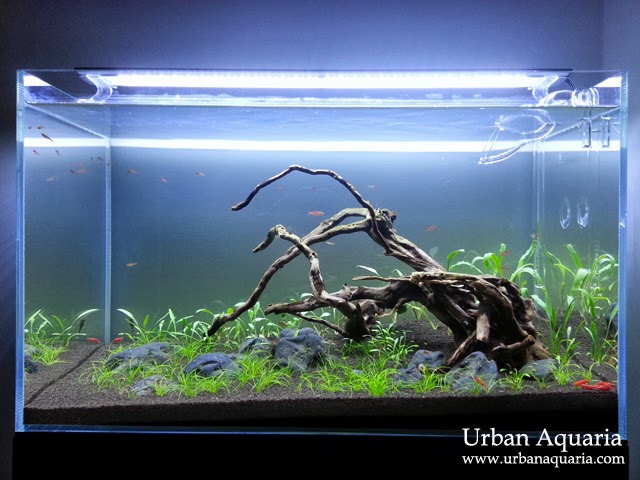 I figured with the slower growth characteristics of cryptocorynes plants, it could become a low maintenance tank that didn't require as much maintenance too. 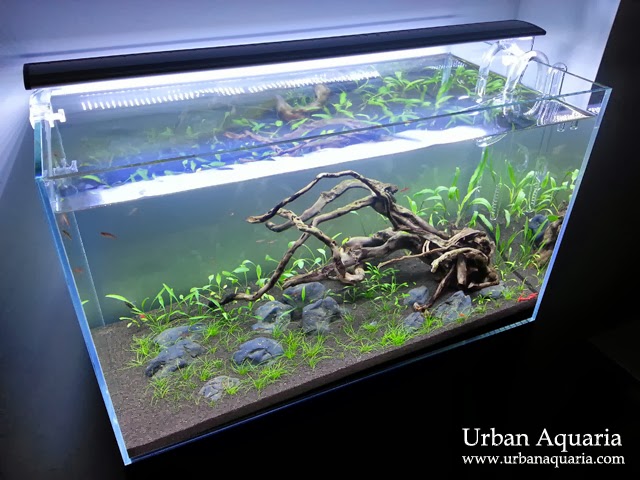 After 2 weeks of staring at cryptocorynes growing just a few leaves, it felt abit like watching paint dry... actually, paint dries faster than the growth of these plants!

I finally realized that i didn't have the actual patience to run a crypt tank (kudos to crypt tank owners for their incredible patience!), so i re-scaped it again and put back the fast growing plants.

This time around i changed the plant selection slightly and used Micranthemum Micranthemoides, Rotala sp. 'Rotundifolia' and Rotala sp. 'Wallichii' as the background plants, and Blyxa Japonica as the mid-ground transition plant. 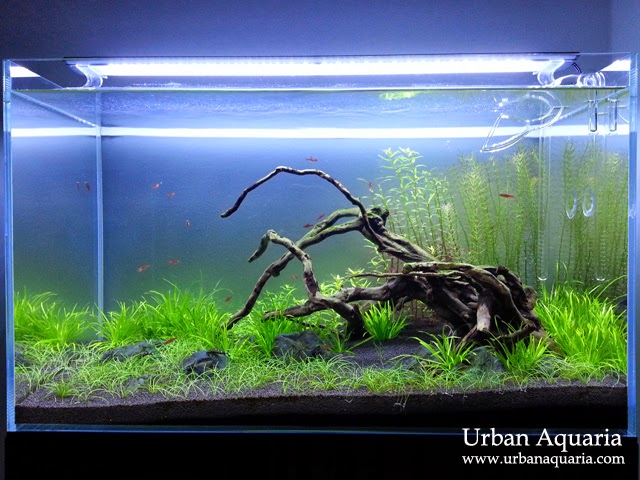 I particularly like the fact that Blyxa Japonica is actually a stem plant, so it is not as invasive and stays exactly where i plant it. It looks great and is much easier for aquascaping. 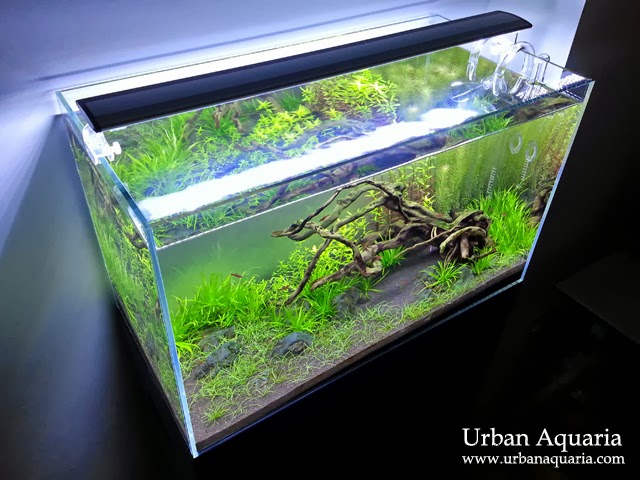 Although the Eleocharis sp. 'Mini' carpet has been growing steadily so far, it'll still need more time to carpet the foreground area.

The shaded "path" under the twisty wood was still empty, as i still have not yet figured out what plants could be used to fill that area.

Over the course of a few weeks, the Eleocharis sp. 'Mini' carpet started to spread very fast (most likely the roots have established properly and a critical mass of growth was reached), noticeably increasing its volume of new runners daily. 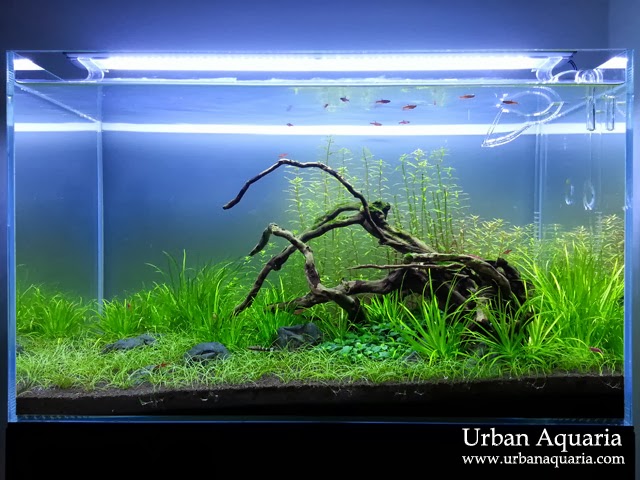 I felt that the Rotala sp. 'Wallichii' looked abit out of place in the background and tends to be abit messy during trimming (due to the fine needle-like leaves scattering about everywhere when cut), so i replaced it with more top cuttings from the Rotala sp. 'Rotundifolia'.

The shaded "path" is now carpeted with Anubias sp. 'Petite' using my super glue + pebbles method. Although its a rather unusual plant choice to create a carpet, i've found that it suits the shaded nature of the area and allows me to easily arrange them to shape the path. 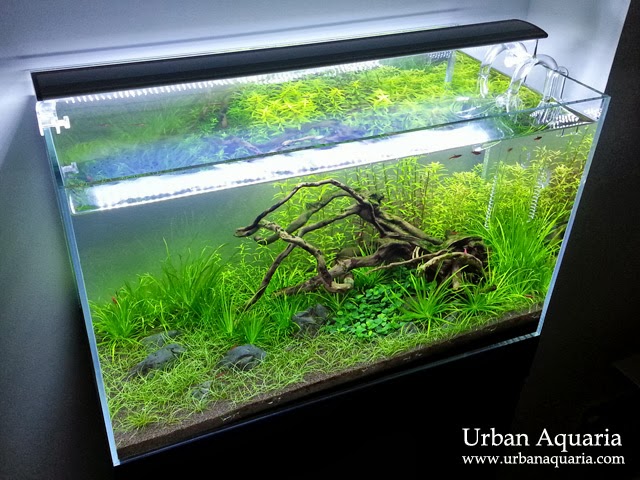 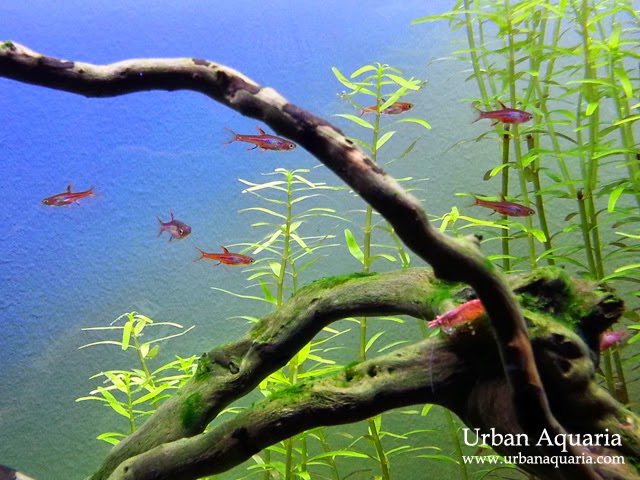 Otocinclus Cocama and Neocaridina Heteropoda busy grazing on the twisty wood covered with nice green fuzzy algae (which was purposely allowed to grow to add a naturally aged "look" to the wood). 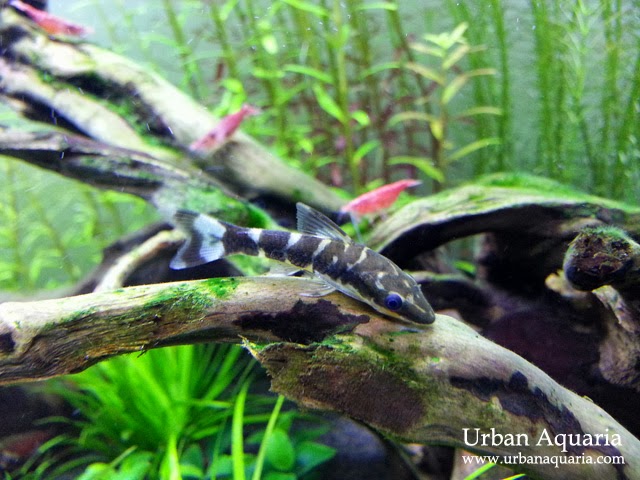 And of course... every tank journal must have the obligatory "shrimplet spotted" photo! :) 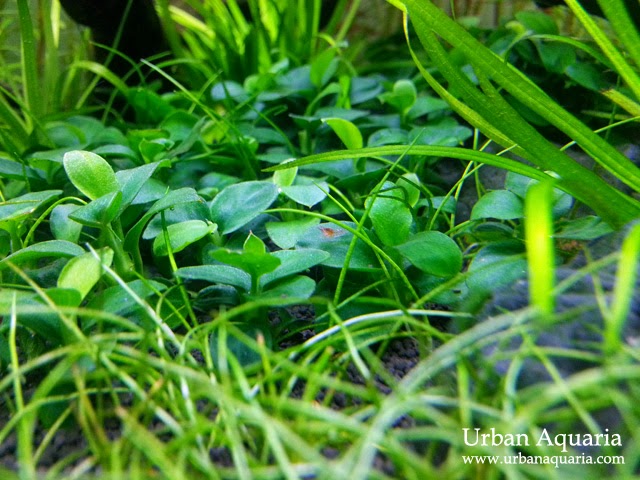 Overall, i think this tank developed quite well over the span of 2 months. I'd consider the plants around 80% filled in at the moment, so its now a matter of maintaining healthy growth (and lots of trimming) to progress towards completing the aquascape.

Interestingly... i haven't experienced any significant algae issues so far yet (probably the balance of lights, Co2 and nutrients are currently just about right). I've not even had the need to clean the tank glass during all this time!

Hopefully this aquascape can still be maintained in good condition (and relatively algae-free) for the rest of the year. :)