Introduced a pair of Crossocheilus Siamensis (aka Siamese Algae Eater / SAE) into the tank... i picked the smallest ones available at the shop, each only around 3cm in length. 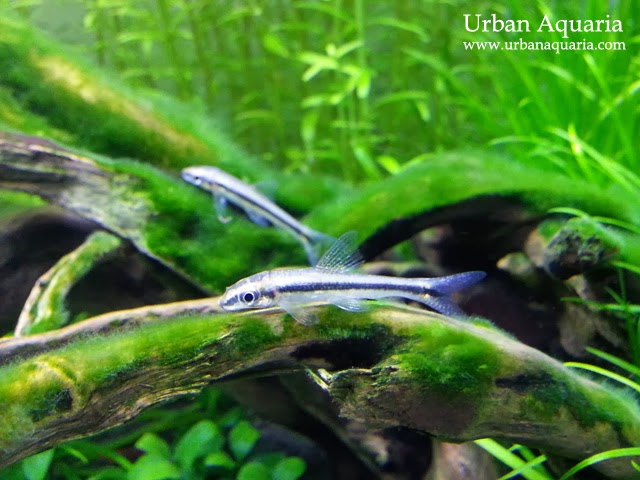 Abit light in color at the moment as they are still juveniles. After exploring for a while, they started to settle down and nibble on some green fuzzy algae, so i guess that's a good sign.

Hopefully their smaller size would allow them more time to help out in algae maintenance... before they grow too large and lazy. :)

Posted by Urban Aquaria at 6:30 pm No comments:

A combination of overseas travel, projects, work... and lots of procrastination, meant that i didn't get around to do any tank maintenance for more than 2 weeks.

As expected, the Rotala sp. 'Rotundifolia' and Micranthemum Micranthemoides quickly grew up to the top, then proceeded to keep growing across the water surface forming a dense canopy and started to overshadow the other plants. 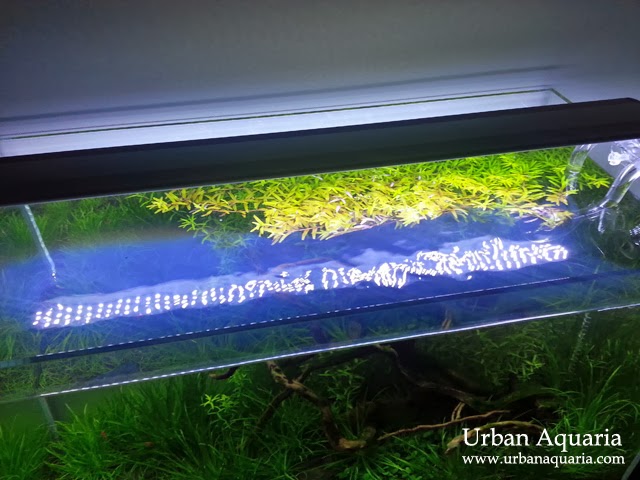 Due to the lack of water changes, a noticeable layer of oily film built up on the water surface too, creating a "rainbow" effect on the surface reflection.

The whole tank started to look rather dim, though the fishes and shrimps seemed to like the shaded environment. :)

Time for a proper trim... proceeded to chop off the overgrown tops. 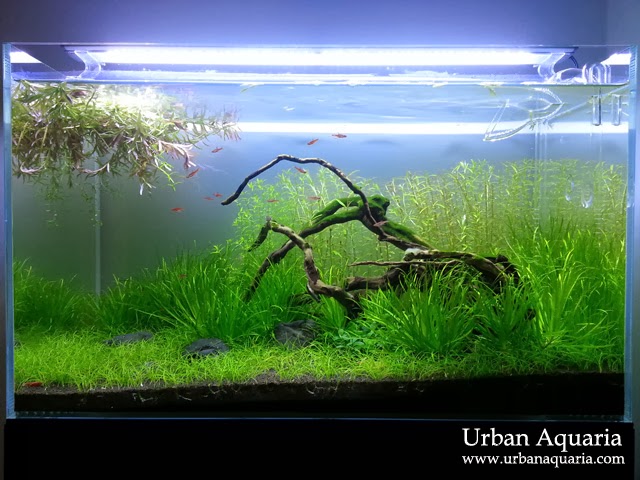 I also noticed there was one bunch of Blyxa Japonica in the front which grew so much that it was blocking the view... so i decided to just remove it.

Uprooting established plants like these will always tend to cause abit of a mess, so i used a pair of tweezers to just pull the base crown of the bunch a little, let the dust settle, then pull it out abit more each time. With abit of patience, i got it out neatly without clouding up the water. 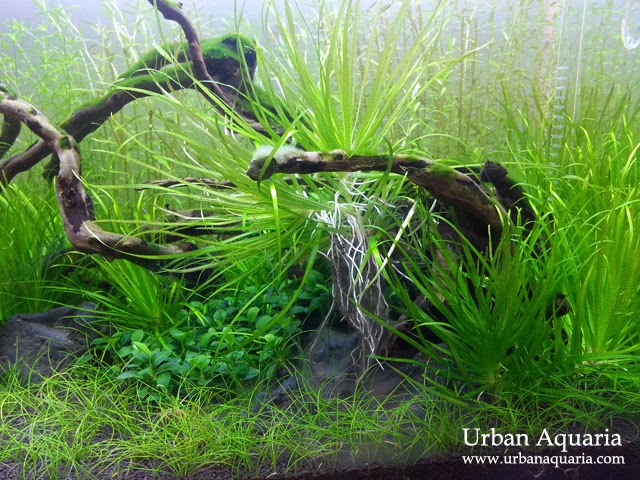 To fill in the gap, i relocated a few Anubias sp. 'Petite' and spread them out to cover that area. 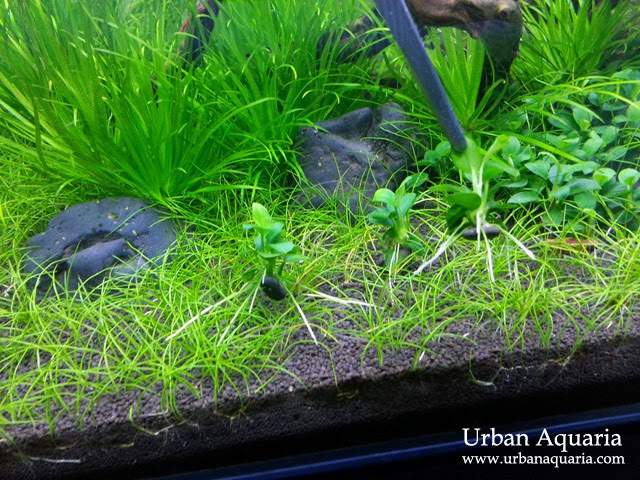 Notice in the above photo, the Anubias sp. 'Petite' have already grown roots which established in the soil substrate. When relocating them to another area, it'll be better to just snip off the longer roots to allow for easier placement and positioning. The roots will grow back out and establish again in time.

Here is the tank after some plant maintenance... and a much needed water change. 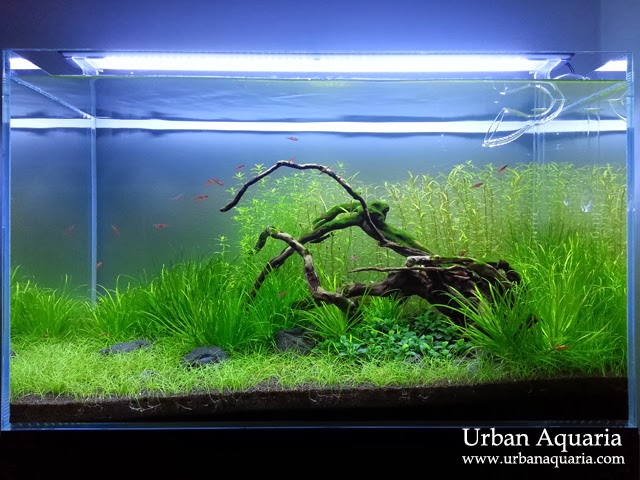 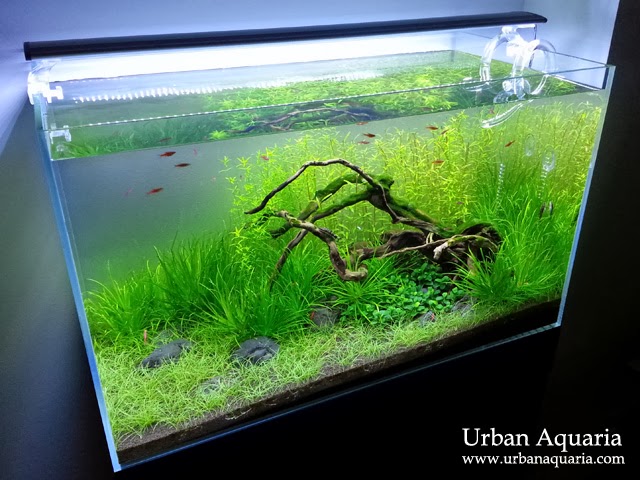 Now just waiting for the other plants to fill in. :)

So far, i've been allowing a thin layer of green fuzzy algae to grow on parts of the twisty wood, but on closer observation, i've noticed that there are actually many other types of algae growing and competing with each other for space on the wood too.

In one particular spot, the algae has a noticeably different growth (probably a different algae species), it is more filamentous and seems to be growing much larger and faster. I felt that it detracted from the overall look, so it was a good opportunity to document my method to remove it.

This algae was really tough to remove by hand and it was securely attached to the wood, and i can't remove the entire wood structure to scrub it off easily (i wasn't keen to kick up the substrate and create a huge mess)... so i decided to do a spot treatment on it using Seachem Excel.

I used a syringe with a long applicator needle and 2ml of Seachem Excel (non-diluted), switched off the canister filter, then injected the solution directly onto the bunch of algae. I let it settle into the algae for a few minutes, then switched the canister filter back on to resume flow in the tank.

Here are the results: 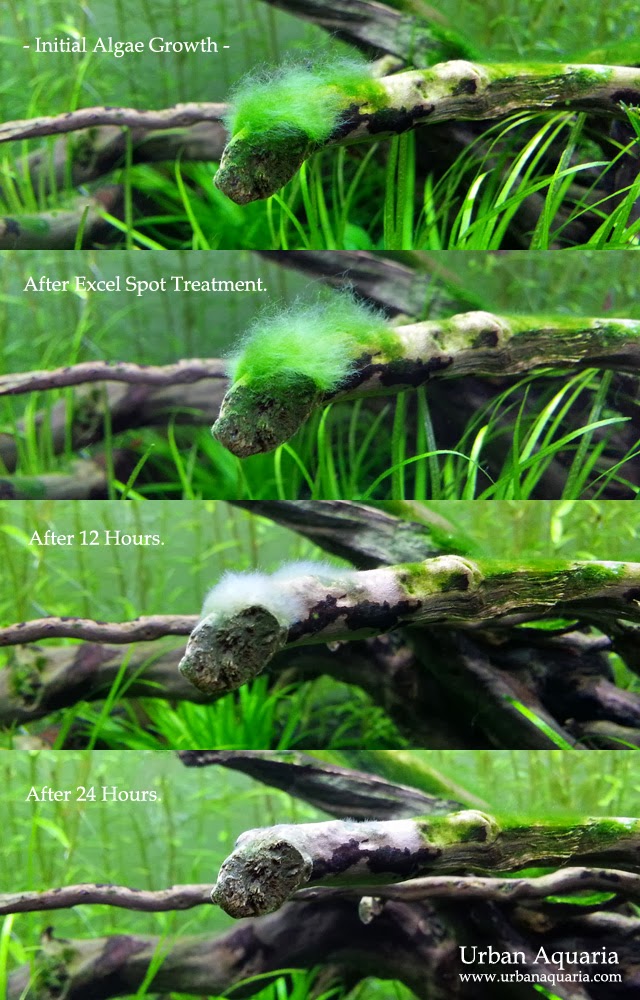 Very effective... after 24 hours, there was almost no more trace of the algae. :)

Its been 10 weeks since i started up my 64 Litre "Forest Edge" Tank and the tank glass and lily pipes are still relatively algae-free so far, seems like this setup is still maintaining a good balance in its parameters.

Although there is no algae in the glass lily pipes, there is some algae forming in my filter hoses (finally have a reason to do some filter cleaning), but i noticed something interesting... 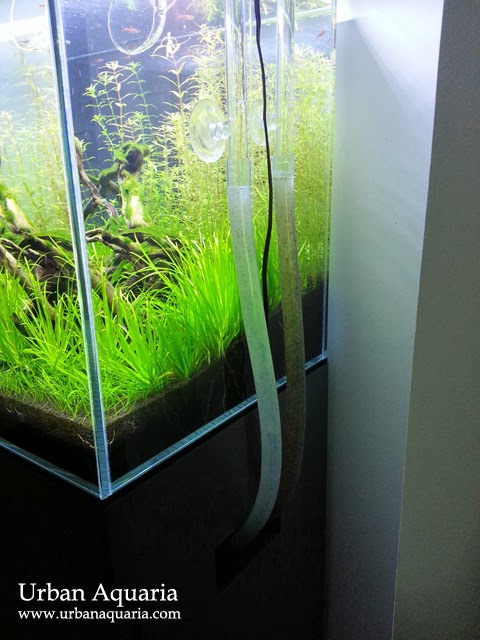 The input hose has noticeably more algae than the output hose.

Initially i thought that it could be due to Co2-rich water flowing out from the inline reactor suppressing the algae growth, but when i checked the output hose inside the tank cabinet, i could see that the section of hose connected before the Co2 reactor also has noticeably less algae too. 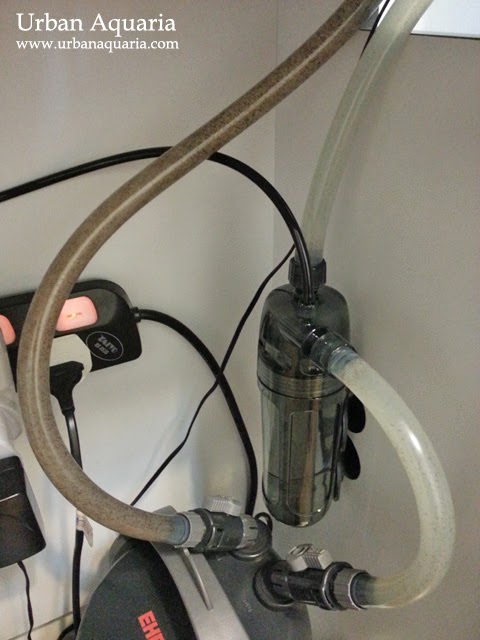 It seems that the water being drawn in through the input hose has excess nutrients to feed the algae, but after it is processed in the filter, the water coming out has less excess nutrients for algae, hence the distinct difference in algae growth between the 2 hoses. I've never seen this effect in my other tanks before.

The only thing that i could think of that might have caused this phenomenon is the placement of a small 100ml bag of Seachem Purigen in the canister filter (this is the first time i'm using this product)... so it could be a direct result of the Purigen absorbing excess organics from the tank water.

I guess this demonstrates how tank water can be effectively filtered to create a noticeable change in water conditions, just by observing the difference in algae build up between the input and output hoses. :)

After some discussions and suggestions from fellow aquarists at the AquaticQuotient forum, the brown stuff in the hoses are likely bacteria colonies breaking down organic material or mulm (instead of algae), which also matches the current observations.