I decided to upgrade my previous 18 Litre "Glass Planter" Outdoor Tank which has been running for the past 2+ months. Surprisingly with slow growing plants and lot of indirect sunlight throughout the day, not much algae appeared (other than some green algae on the glass which was easily cleaned off), i guess the low-bio load and minimal nutrients probably helped to ward of algae issues.

So i got a longer tank custom made to utilize the shelf space more efficiently, yet still keep to the low-profile style. The new tank dimensions are L60cm x D25cm x H18cm, quite similar to the ADA 60F tank design in terms of dimensions (though with slightly less depth).

As i wasn't planning to create an elaborate scape (and i prefer it to be easily setup and taken down if required), i chose to stick with sand substrate and use the same types of small volcanic rocks.

This time round i was inspired by the grassy sand dunes at beaches which just feature a simple combination of beach grass and rocks. 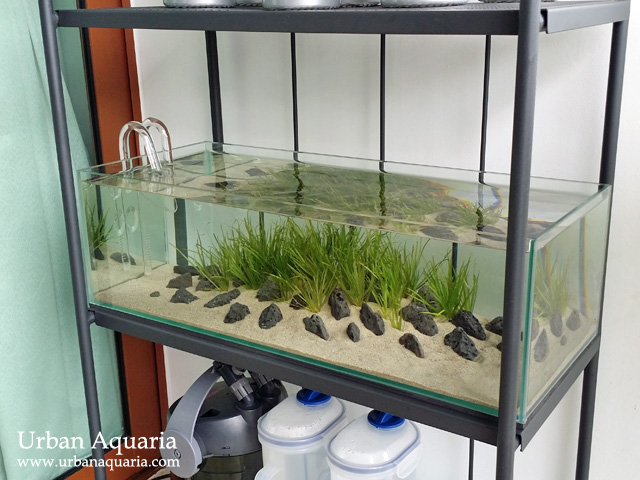 The sand was piled up higher in the middle of the tank and the rocks were scattered down the slope.

I choose to use Blyxa Japonica to recreate the beach grass look (it coincided with a plant trimming harvest from my other tanks). What i like about Blyxa Japonica is that its an adaptive plant that can grow well as a water column feeder and its easy to get an instant nice grassy hedge with just bunches of them. 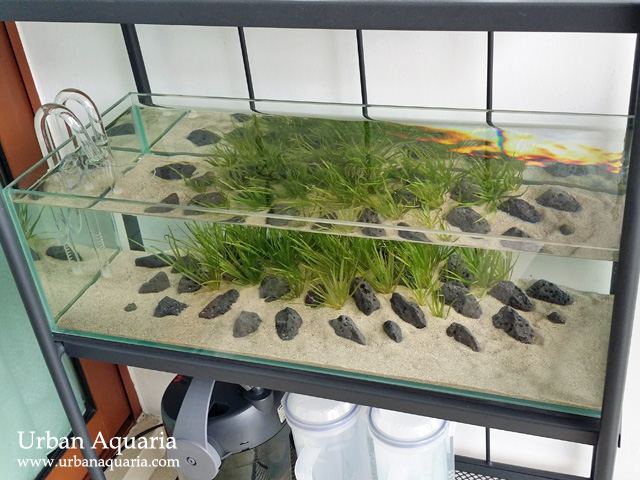 The tank is filtered by an Eheim Ecco Pro 130, which is in turn connected to Acrylic Lily Pipes. I adjusted the flow rate to around 70%-80% to regulate the current, to the point that there is good overall circulation and all the plant leaves are swaying gently in the current, but not too much that they get uprooted.

I'd have to say that this tank is one of the fastest i've ever setup, from empty tank to hooking up equipment to hardscaping and planting to completion, all in it only took less than 30 minutes.

A group of 20+ cherry shrimps (aka maintenance crew) were introduced a few hours after tank setup, the filter already contains a portion of cycled bio-media and the sand substrate is inert, so the parameters stay relatively stable for the fauna.

I'll probably add more smaller and shorter plants in between the rocks as accents, perhaps some Eleocharis sp. 'Mini' or maybe some Micranthemum 'Monte Carlo' could be nice. Will see what i can harvest from my other tanks. :)

Posted by Urban Aquaria at 1:00 pm