Here is a photo i took of it today after doing some tank maintenance and cleaning the front glass panel (nowadays i leave the sides and back glass panels with abit of green algae for the shrimps and otos to graze on). 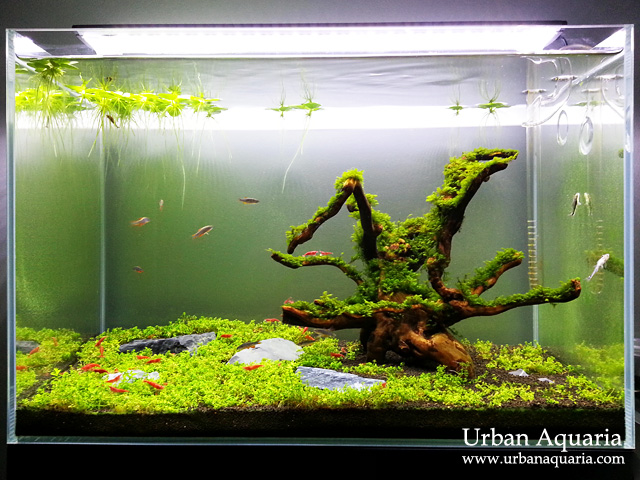 The main area of HC carpet on the left and middle of the tank still looks good, but the HC under the fissidens tree on the right side has mostly thinned out, from this experience i can see that any blockage of light to HC plants will affect their growth and they'll eventually wither away and disappear (you can even see the bare patches mirrored directly under the shadow of the bogwood branches). The flow is also relatively weak on the right side (almost no circulation there) so that also affects the HC growth in that area.

Next time i'll position the majority of my plants in areas with more flow, and perhaps less plants (or just plain open spaces) in areas with less flow.

The slope has unfortunately started to flatten out over time too, without additional rocks or wood pieces to support the back section of the tank, water movement and constant shrimp picking gradually shifted the fine powder type aqua soil. As a result the HC at the back of the tank ended up with exposed roots, which looked rather unsightly, so i removed them to let newer growth spread back properly.

Moral of the story... always support and reinforce slopes from the start to counter natural erosion, especially for fine grained soil.

So far, i've still not dosed any fertilizers yet and the plants still look okay, no nutrient deficiencies spotted yet, most likely the ADA aqua soil still has enough nutrients for the plants at the moment... i guess once the soil's nutrients run out, then it'll be time to start dosing fertilizers.

No significant algae issues so far (fingers crossed), only the usual green algae film in the glass panels.

Although my fish bio-load is kept low to balance the waste/nutrient cycle (currently only 8 x Danio Margaritatus and 2 x Otocinclus which are all very small fishes), there has been a population boom in cherry shrimps, so much so that i have to keep transferring them out to other tanks or it becomes abit overcrowded. 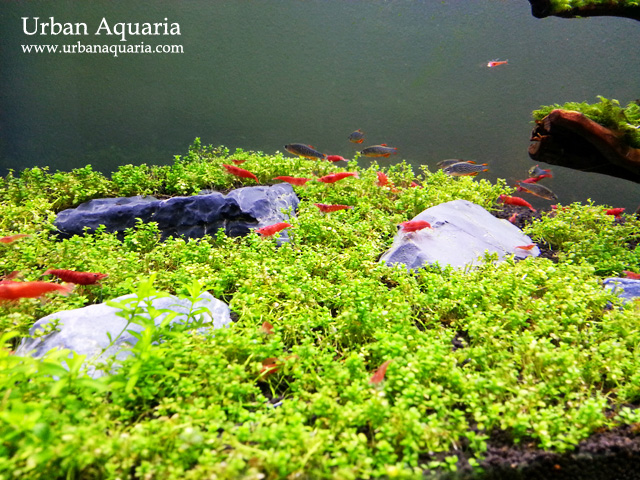 Oddly, those few small pieces of rocks in the tank turned out to have some pH increasing properties... the tank's water pH is now around 7.2-7.4, up from 6.4-6.6. As the pH change was gradual, the fishes and shrimps didn't display any visible problems so its not a big issue.

It seems even with ADA aqua soil's pH reducing characteristic, just a few small rocks can still move pH up over time. I'll probably remove those rocks soon and test if the pH drops back down again.

Overall, the tank is quite easy to run and not much maintenance required. Its been an interesting experiment, but i'll likely be taking it apart over the next few weeks as i'll need the soil and plants for another new tank project. :)